When Chris and I got engaged in 2011 our first thought was “how the heck are we going to do this?”.  As a little girl, I never dreamed that we would have the difficult task of deciding where to have the ceremony.  Since both of our families live on opposite coasts we had the unique task of picking a place that was significant to both of us, without choosing one person’s state over the other.

Chris and I were sitting around talking one night about where we’d like to get married (this was before we were engaged), and he mentioned Disney World.  I’ve never known a guy to care about wedding preparations as much as he did, and Chris was adamant that Disney was where we should get married.  He knew a couple who had done it and told me to write the wife and ask her about it.  As she was telling me all the pros about being married at Disney, I just knew it was the right place for us too.  Not only would it be a location significant to the two of us, but it was just an easy choice. 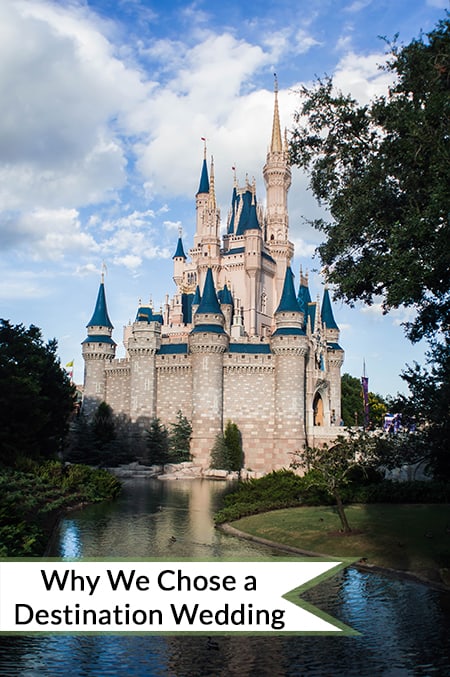 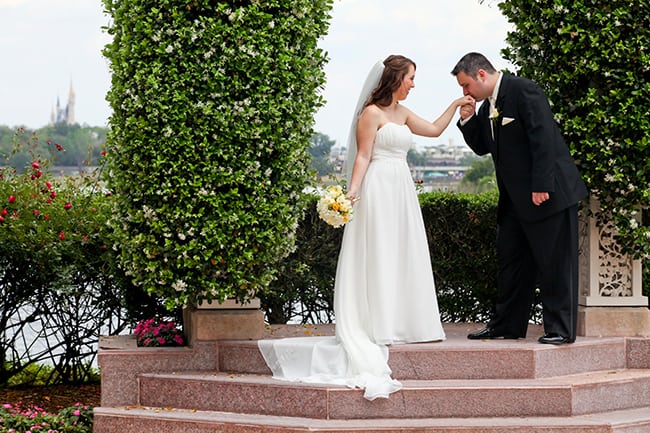 The biggest reason we wanted a destination wedding was because our families live on opposite coasts.  Traditionally couples get married where the Bride grew up, but if we did that we knew that a lot of people wouldn’t be able to travel from California and we didn’t want to upset anyone.  And if we got married in California we would’ve had the same issues with my family from Virginia.  It was honestly just easier for us to pick a neutral location, that way no one’s feelings would get hurt and it wouldn’t seem like we were choosing one state over the other. 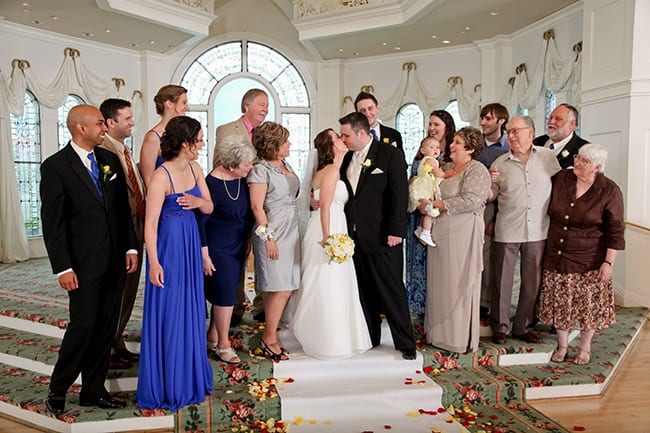 We had less than 20 people at our wedding, including Chris and I, and it was perfect.  Disney did offer larger wedding packages (at a huge expense) but we really wanted just immediate family and some close friends there, which is exactly what we got.  Did we miss the family members that couldn’t be there?  Of course!  But, we were able to have a nice reception in California a few months after the wedding and celebrate with them then.

Disney put everything together for us.  And I do mean everything.  I told them what colors I wanted, picked out the cake and flowers, and they took care of the rest.  My only job was to get myself to the pavilion on time, and even then they provided everything I needed to make that happen. Walking into the wedding pavilion that morning I couldn’t have asked for a more perfect setting.  Everything was decorated exactly as I had envisioned, and I didn’t even have to lift a finger (thanks, Disney!). 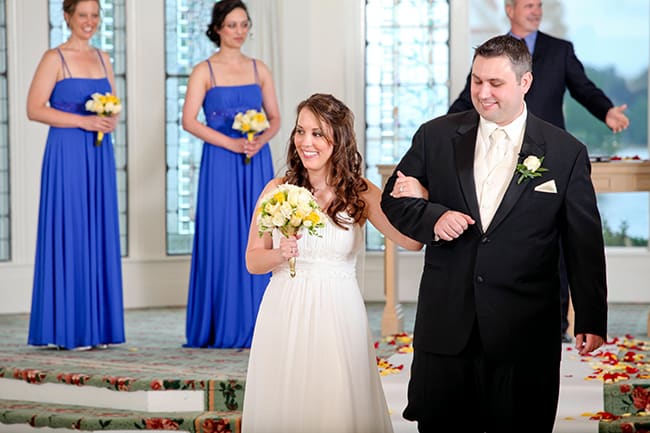 Chris and I got married at noon on a Friday at Disney and were officially back in our street clothes and out at the Magic Kingdom by 3:30 that afternoon.  They have to be quick because the wedding pavilion has four weddings a day: 10am, 12pm, 3pm, and 5pm.  This worked out well for us because we were able to enjoy our entire day without being completely exhausted. The great thing about destination weddings are that they are not an all day affair.  So you can go to the wedding and do things after (like head to the parks) if the ceremony is early enough in the day.

One thing I absolutely loved about a destination wedding was the fact that my entire family was together.  I hadn’t been to the parks with my mom and Grandmother since I was little, so that was fun to be able to go with them again.  And my in-laws had never been to Disney World so being able to show them around was a huge highlight for me.  It also gave all of us time to get to know one another, and because our families live on opposite coasts being able to do that is very rare.

If I had to do it all over again, I’d still want my wedding the exact same way.  Having a ceremony so intimate felt right for us and it was true to who we are.  Did you have a big wedding or a small wedding?  What made it special for you?

I create easy-to-follow craft tutorials to help you build confidence with your Silhouette Cameo and make projects that bring you joy. END_OF_DOCUMENT_TOKEN_TO_BE_REPLACED