We’ve been counting down the days until the Disney Infinity release in our house for months. Not because we have kids that will play it, but because we wanted to play it! Anything Disney is a must have in our home, and this game was no different.

What is Disney Infinity?

Disney Infinity is a multiplayer action-adventure console game for ages 10 and up. The game initially comes with three characters (Sully, Mr. Incredible, and Captain Jack Sparrow) that you can play with and explore their worlds.  There are a dozen of other characters you can buy, but they are sold separately.

You can also buy power discs (sold separately) for the game.  Characters can be powered up with four different discs at a time. These discs can affect the terrain, add special vehicles to the game, or alter a character’s statistics. As of now there are twenty different discs being sold two to a pack in a blind bag, this set is called series one.  There are plans for three series of power discs total.

There are two main modes in the game: play set and toy box. In play set you enter the worlds of the characters you play (ie: Davvy Jones locker when playing with Captains Barbosa or Jack Sparrow) and interact with them in their stories. You cannot have characters from different stories (ie: Sully from Monster’s Inc and Captain Jack from Pirates) interact in this mode. However, in toy box mode you can create your own world and have all the characters (no matter what their stories) interact with each other.

I wanted the game specifically for the Pirates interactive game play, and since we needed someone else from the movie so Chris and I could play together, we bought Captain Barbosa. 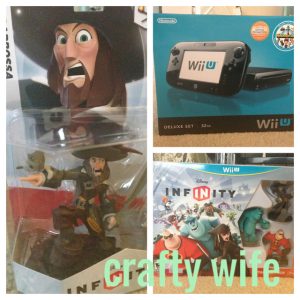 The game was a lot of fun!  We got to pillage towns, pretend to be a part of the Royal Navy, and fight off Davvy Jones and his fishy crew.  Chris and I also had fun shooting each other with cannons and guns (I mean, Barbosa and Jack weren’t too fond of each other at the beginning, right?!) while trying to figure out how to play the game.

Here are some of the things we loved about the game:

Here are a few problems we found with the game:

Overall, we really enjoyed playing the game. I guess we figured we were hooked when five hours went by and neither of us realized it until we paused the game for a bathroom break. Personally, I think Disney has made a great game that an entire Disney super fan family can enjoy together.

One thing I’m particularly excited about are some of the other characters we’ll get to play in the near future (Rapunzel, Woody, Buzz, etc).  You can read up on the game, the upcoming expansions, and more here.

Online Only Sale for Character Figures:

I believe all of these deals end on August 24th.

I create easy-to-follow craft tutorials to help you build confidence with your Silhouette Cameo and make projects that bring you joy. END_OF_DOCUMENT_TOKEN_TO_BE_REPLACED