Last week we got a pretty nice blanket of snow on the ground here on the East Coast.  Unfortunately, it snowed for a day and a half and it all melted within twenty-four hours after it stopped.  It was a tad bit depressing that it didn’t stick around for a bit longer, but it was probably a good thing since we had a planned trip to Florida that weekend.

After numerous trips to Disney over the past four years, Chris and I finally figured out it was much easier for us to drive down to Florida instead of flying.  We came to this conclusion after Jetblue decided to start charging double and wasn’t offering any direct flights from our preferred airport.  So, what use to take about two and a half hours to get down there, now takes thirteen hours.  You may call us crazy since we make that drive often, but it works out pretty well for us.  We don’t have to worry about the bags being more than fifty pounds, and we can bring loads of snacks which means we won’t have to spend as much money at the parks when we get hungry!  Also, we own a hybrid so the amount we spend on gas is still less than what it would cost the two of us to fly!  See, we’re not that crazy!

There were a few reasons we decided to take a trip to Disney this month, and one of them was that we needed to take our winter seasonal picture (You can read the original post about the seasonal pictures here).  So far we’ve taken our summer picture at Epcot, our fall picture at Hollywood Studios, and on this trip we took our winter picture at Animal Kingdom.  Below are the pictures from this trip.  I haven’t picked which one I’m going to use yet, probably because I haven’t decided how I’m going to hang everything on the wall once the project is done. 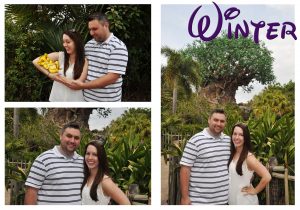 And just in case you forgot what the previous seasonal photos looked like, here is a small preview: 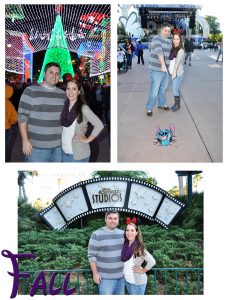 Clearly I did not start ordering multiple pictures until the Fall.  That might come back to bite me in the butt when I start trying to put all the pictures together, but I won’t know until later next month anyway.

What I really like about the seasonal photos is that is shows what we did over the past year.  It doesn’t necessarily show each season (it’s Florida, it’s always warm!) but it does show how we’ve grown (just a tad) over the past year.  It’s also kind of funny to see how different my hair is in each picture, Chris pretty much looks the same.

So, did anyone else do something fun to commemorate their first year of marriage?  Or are we the only crazy kids who have traveled, more times than I can count, during the first year?

I create easy-to-follow craft tutorials to help you build confidence with your Silhouette Cameo and make projects that bring you joy. END_OF_DOCUMENT_TOKEN_TO_BE_REPLACED