Are you all out of love for my Star Wars posts yet?  I hope not because I have another really fun one from our recent Disney trip today!

Chris and I are huge fans of all the special events that Disney puts on each year, but one of our favorites is definitely Star Wars Weekends during select weekends in May and June.  When we first started going to this event I was pretty nervous, because while I like Star Wars I’m not a die-hard fan like some of the people who attend.  I wasn’t sure if I would enjoy it or even if I would find anything interesting.  Of course Disney proved me wrong, and I’m really glad they did!

So if you’re like me and aren’t sure these weekends are for you, I’m here to tell you that they are.  There is a little something for every kind of Star Wars fan out there (from the casual viewer to the die-hard fanatic), and you really can’t help getting swept up in the energy and excitement along with everyone else!  I may not dress up in the fancy Jedi garb (one woman was in flannel this year, and it was hot out!) but I will rock a simple Star Wars shirt or two! 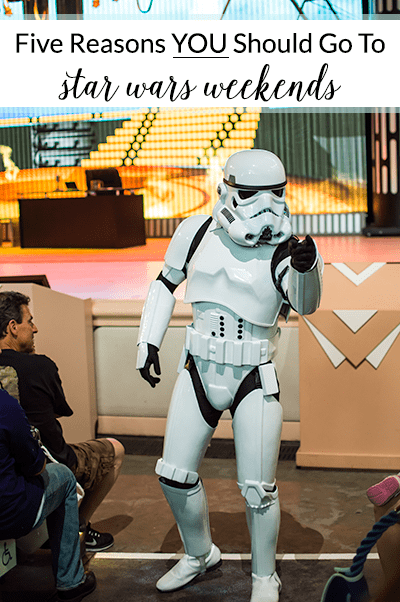 There are of course many reasons to head to the parks for this fun event, but I’m narrowing it down to our favorite five things that we do every year!  Always check the schedule for the daily events so that you can be sure to be at the parks in time for whatever you want to do.  Chris and I have missed out on a few things in past years because we didn’t plan well, and I don’t want you to make the same mistake!

Stars of the Saga Shows 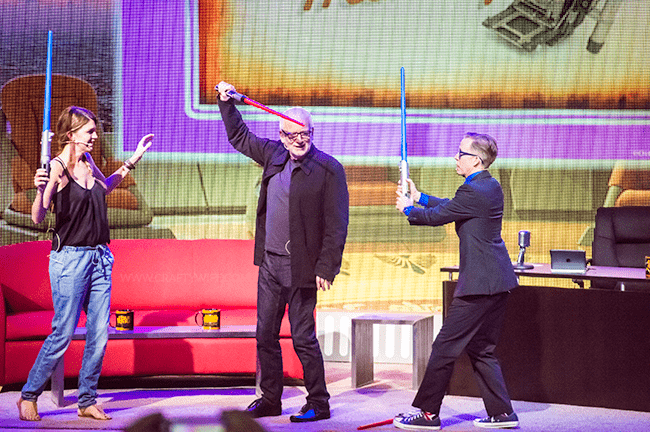 Chris and I absolutely love the talk shows during the event weekends and usually try to go every single day we are there!  The first weekend this year had Ian McDiamird (Senator Palpatine/the Emperor) who was the entire reason we picked that weekend to head to the parks, and Amy Allen (Aayla Secura).  We saw the show all three days (Friday, Saturday, and Sunday) and loved how it was different every single time.  You may not think it’s worth it to watch the same show over and over, but Chris and I really enjoyed all of Ian’s stories from the sets.  He was full of stories about the people he worked with, his time in the Emperor make-up, and his conversations with George Lucas.  He was also pretty hilarious and so much fun to photograph! 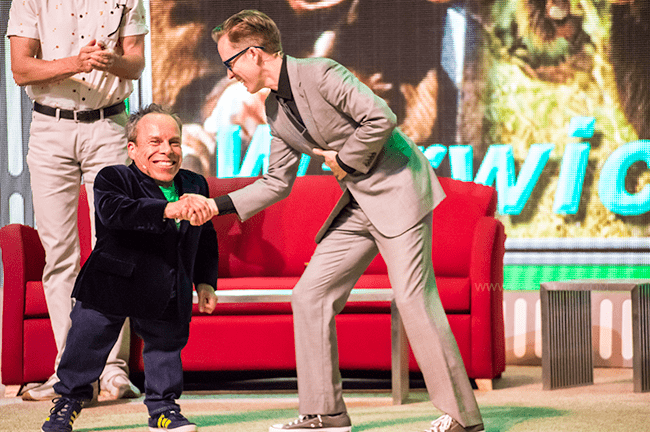 The second weekend we were there (Friday only) was Warwick Davis and Silas Carson, who were also great!  Silas was actually my favorite during that weekend because we’ve seen Warwick before and his stories were very similar to those we’ve heard on previous weekends.  Silas though was someone new, and since he played so many characters in the films he was a lot of fun to hear from! 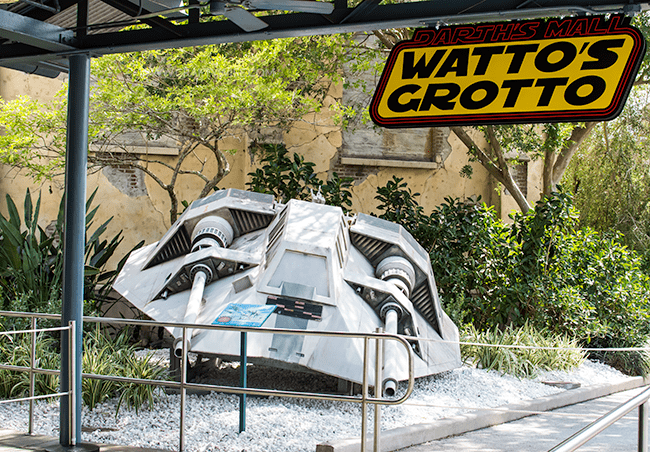 Darth’s Mall has been in a different location the past three years, and this year was the wildest of all.  It was actually behind the old Backlot Tour entrance (by Lights, Motor, Action!) and they split it up in to three different stores.  The lines for two of the stores were always about half an hour long (they’re in the shade though which was really nice!) and the third store was just one you could easily walk through after exiting Watto’s Grotto, so you didn’t have to worry about waiting in line for that one!

One of the stores had Passholder merchandise which Chris and I gladly snatched up and the other stores were full of clothes, pictures, toys, and yummy food.  We had a blast hanging out in there, and even snapped up a few things for our baby boy (seen here)!  Plus, it was really nice to get a break from the heat in the air condition for a little while.  That weekend was brutal at Disney!

Legends of the Stars Motorcade Parade

Chris and I have never done this, and I am so bummed about it!  I’ve heard from others that it is so worth it and so much fun because you get to see the stars of the weekend out and about during this Star Wars themed parade.  We tried getting there an hour early on the first Saturday we were there, and there were no good spots left.  It was insane.  We were told that you had to be there when the park opened to even have a prayer of getting a good spot, and Chris and I are not morning people so…..that didn’t happen.

The parade starts near the front of the park and ends at the stage in front of the Chinese Theater where they put on a small show, so if you can the spot you want to get is near the stage.  Here is the opening day parade on youtube if you want to see what it’s all about! 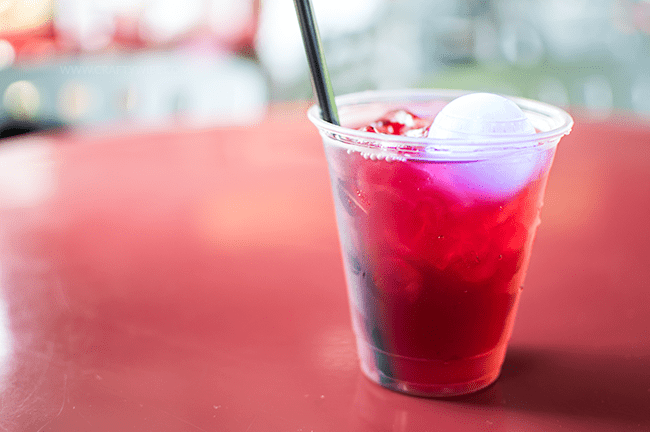 We’re those people who tend to save up for months in anticipation of all the goodies they’ll offer at the Star Wars Weekends event.  I mean, Chris’ home office is pretty much decked out with all things geeky and we tend to add to that every year which is always fun!  So, if you’re ever planning to go to this event expect to drop a little bit of cash.  You won’t be able to resist the powers of the force, I mean store.  It draws you in and sucks you dry.  Seriously.

Chris and I usually like to try all the drinks they have available (and Chris likes to collect the Star Wars themed ice cubes!), but this year I wasn’t able to join in.  It was kind of a bummer that I couldn’t find one stand that offered the alcohol free drinks they were advertising, so I just had to watch as Chris sipped on his super cool Star Wars themed drinks.

Symphony in the Stars 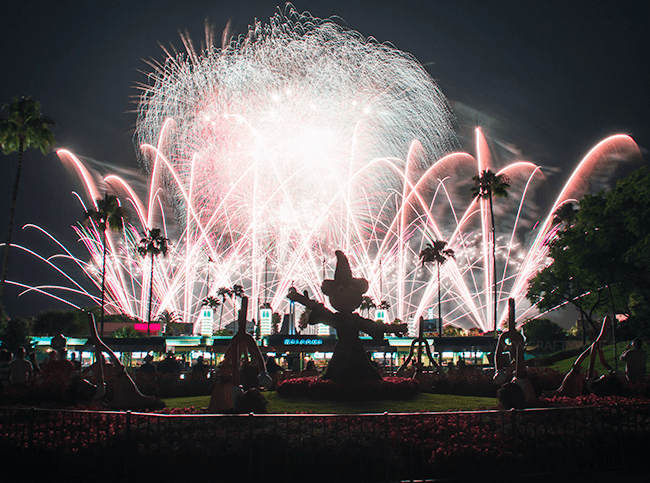 Besides the shows and the stars, this is my favorite reason to visit during Star Wars Weekends.  The fireworks show at the end of the night is one of the best I have ever seen, and since the show is set to Star Wars music it is truly epic.  This year I wanted to try shooting the show from outside the parks in front of the Mickey topiary, and while this is a great spot for photographs it’s not a great spot if you just want to enjoy the show!  For one thing, they don’t play the music outside of the park so you don’t get the full effect of the show.  Also, if you’re taking photographs out there people don’t care and they will walk right in front of you and start snapping away when the show starts (I was pretty irritated and wasn’t afraid to let them know since I had staked out my spot for an hour!).

If you’re inside the parks to watch this show, there is a small show at the stage in front of the Chinese Theater that you may want to watch!  We’ve never done it but know people who have.  I’m not a fan of standing in front of the stage because you don’t get a good view of the fireworks when you do that.  Instead, I suggest standing further back on the street (maybe back by the shops) so that you’ll have a fantastic view of the fireworks as they go off!

So tell me, what is your favorite thing to do at Star Wars Weekends?  If you’ve never been, is it something you think you’d like to experience?

If you’re following me on Instagram (and even if you’re not!), I’ve set up a fun Disney hashtag so we can all share our favorite Disney memories from the parks.  If you want to join in,  use the hashtag #cwdisneylove.  I can’t wait to see what parts of Disney you love!

I create easy-to-follow craft tutorials to help you build confidence with your Silhouette Cameo and make projects that bring you joy. END_OF_DOCUMENT_TOKEN_TO_BE_REPLACED