Christmas is my absolute favorite time of year.  It’s magical and makes me feel like I’m five years old again, waiting for Santa to bring me presents and staying up late to see if I can hear the reindeer on the roof.  Nothing brings back the feelings of nostalgia and childlike wonder than celebrating Christmas at Disney World!  It’s a beautiful sight when you see everything decorated for the holidays.  The lights on the castle, the Christmas trees, and the holiday party are all part of the beauty and magic during this time of year.  And for me, Christmas hasn’t started until I see the decorations at Disney.

My favorite thing to do at Disney is to go to Hollywood Studios to see the Osbourne Family Spectacle of Dancing Lights.  I know that a lot of people are familiar with the story of how the lights came to Disney, but if you aren’t theres a brief overview below. 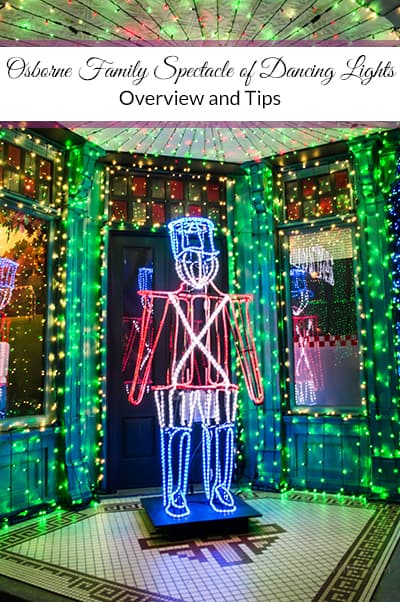 The lights began in Arkansas where Jennings Osborne put the display up for his daughter one year.  Every year more and more lights were added to the display until Jennings was sued by his neighbor in the 1990’s for the spectacle and the traffic problems the lights caused.  A settlement was reached but Jennings was sued again for violating the terms of the settlement.  He was ordered to take down the display and that was when the Osborne family decided to share their lights and offered them to the Walt Disney World Resort.

This year is the last year the lights will be up at Hollywood Studios and I cannot even begin to tell you how upset I am about it!  If you’ve never seen the display, think of the brightest Christmas lights display you’ve ever seen and multiply it by a hundred.  It lights up the entire park and is an amazing dancing light extravaganza.  Oh yea, I forgot to mention that the lights dance to some great Christmas music by the Trans-Siberian Orchestra (my personal favorite!) and more.  It’s honestly the best part of Christmas at Disney (in my opinion!).

Every ten minutes the lights come alive and dance to the music.  My favorite is definitely the Trans-Siberian Orchestra but you’ll also hear Felix Navidad by Jose Feliciano, Christmas is Starting Now by Phineas and Ferb, and a few others.  And while you’re listening to the songs and watching the lights dance you’ll also see Florida snow come down from the sky!  It truly is a magical sight to see.

1.  Take pictures for your Christmas cards!

There are plenty of spots where Disney Photopass Photographers are waiting to take your picture, and our favorite is down the side street of Streets of America.  This is a picture we used for our card in 2012 (I think) and it is still one of my favorites to date! 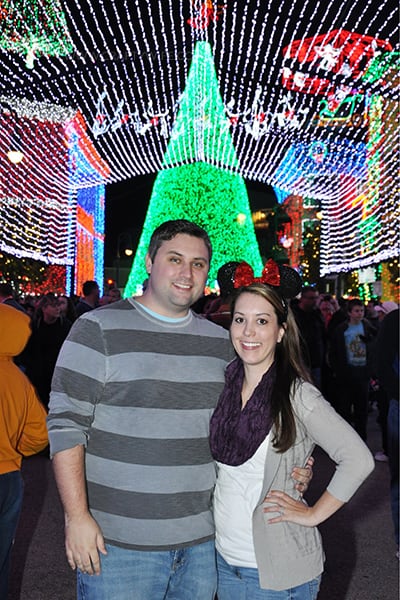 The Streets of America tend to be very crowded for the first few hours after dark.  It’s usually so crowded that it is hard to move around and enjoy the display.  If you wait until later (maybe an hour before the park closes) you’ll be able to enjoy the lights and move around at your leisure.  Also, the lines for the photopass photographers aren’t as long so your wait time will be greatly reduced during this time.  Disney keeps the lights on two hours after the park closes so you can stick around and get some really great pictures after the majority of people leave! 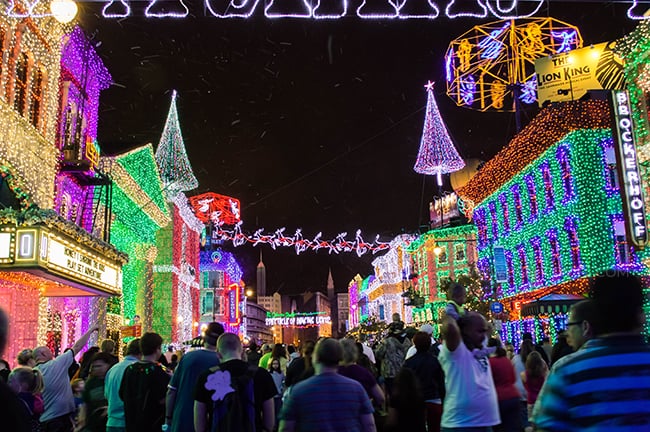 Photographing the lights is not difficult. In 2013 it was my first year using my DSLR during the spectacle and I found it quite easy to capture pictures in Manual mode.  Because the lights are so bright you can use a higher shutter speed and a lower ISO which should result in amazing pictures, even if you’re a beginner! 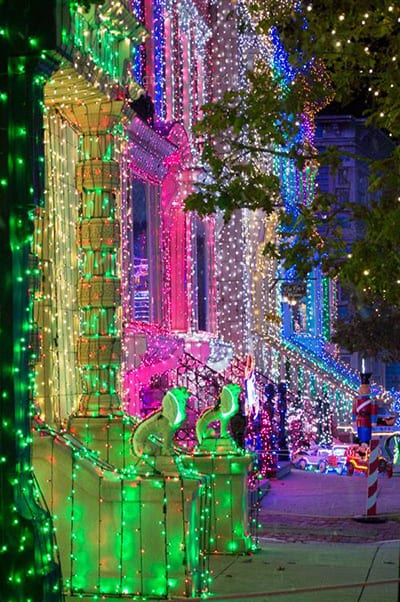 What are your thoughts?  Have you been to Disney during Christmas and gone to see the lights?  What were your favorite things to see while you were there?

I create easy-to-follow craft tutorials to help you build confidence with your Silhouette Cameo and make projects that bring you joy. END_OF_DOCUMENT_TOKEN_TO_BE_REPLACED