After seeing Camila’s magazine holder makeover on the Blog Strut last week, I thought that I could do something similar to help with my desk organization.  I even went out to Michael’s and bought some really cute scrapbook paper to do my own twist on her project.  But after I thought about it I realized I wanted to do something different.  I just didn’t know what my different was.

I’ve found that asking for ideas on my Facebook page is always a great way to go when I have no ideas for my projects.  Everyone had great ideas.  There were suggestions of spray paint, doilies, stencils and more.  I had been leaning towards stenciling after I scrapped my original plan and was more than happy to go along with that idea.  The problem was, I had never used a stencil in my life and I wasn’t sure how to go about it. 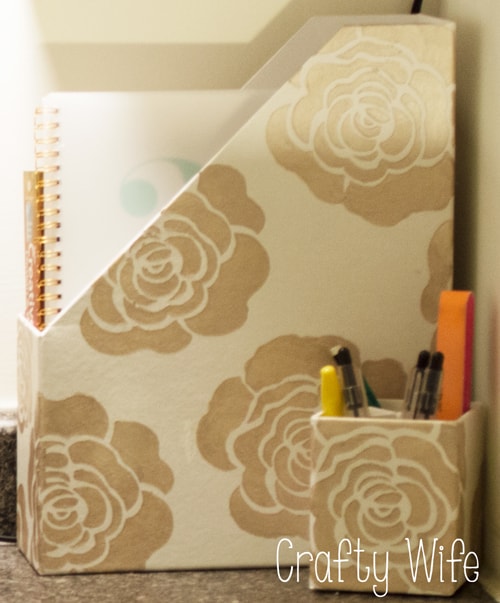 I decided on a rose stencil and champagne colored acrylic paint (both from Martha Stewart) to decorate my magazine and pencil holders from The Container Store.  I was really excited to get home and get started because this was uncharted territory for me.  And who doesn’t love trying new things every once in a while?

Honestly?  I ran into some problems with the stencil.  Even after reading all the directions on the back of the package I still seemed to mess it up.

But even though it was a sometimes difficult and painful process…..I have to say, I’m really loving the end result.

Looking back on the project, I realized there are a few things I could have done differently:

What are your feelings on stencils?  Love them or hate them?  I think I’ll tackle another project like this at some point, but I’m going to need some great pointers before I start!  Do you have any tips for a stencil newbie?

I create easy-to-follow craft tutorials to help you build confidence with your Silhouette Cameo and make projects that bring you joy. END_OF_DOCUMENT_TOKEN_TO_BE_REPLACED