This past weekend Chris and I were able to visit Disney for one of our favorite celebrations: Star Wars Weekends.

If you’ve never been, you are most definitely missing out!  For two weekends in May and two in June, Disney’s Hollywood Studios invites actors from the movies to come and sign autographs, hang out with fans, and put on shows.  They also have a huge shopping mall (called Darth’s Mall….clever huh?) overloaded with fun Star Wars memorabilia.

Over the past four years, Chris and I have been three times and always have a blast.  This year we planned our trip for the first weekend in June, since Warwick Davis was going to be signing autographs.

I love him and was so excited that we could potentially meet him!  However, we found out that in order to (hopefully) get the fastpass for the autographs line, we had to camp out overnight in front of the park.  I love Warwick, but I was not about to sleep on the pavement in hopes that I’d get the chance to say hello.  So, a little heartbroken and majorly disappointed, Chris and I set out to find other things to do.

On our first day there Chris wanted to go to the “mall” so off we went!  It was about 100 degrees outside and because the mall had air conditioning it was extremely crowded.  But Chris and I were able to get in and look around at all the great stuff they had to offer.

Chris was so excited to finally get a cell phone case for his iPhone 5, we’ve been waiting ever since we bought them last September.  He also got a name tag (it was only available to Disney passholders) that he wore around proudly the entire time we were at Disney.

I was more excited about him taking photos with the Disney photographers while we were there.  During Star Wars Weekends they always have fun backdrops to take pictures in front of, and I was really happy we picked this one to take Chris’ photo in front of. 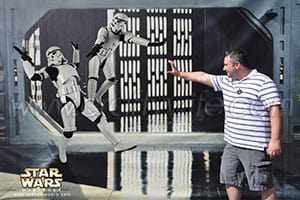 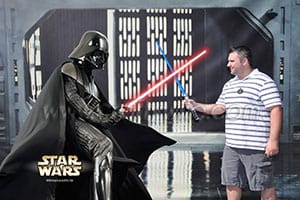 On Sunday we woke up (very very late) and found out that Warwick Davis was hosting his show, ‘An Ewok’s Tale’ at Hollywood Studios that day.  So we quickly got ready and headed over, hoping and praying that we were able to get seats.  Once at the park and in line we were able to enjoy a bit of the entertainment and relax…because at that point we knew we’d be able to get in and see the show! 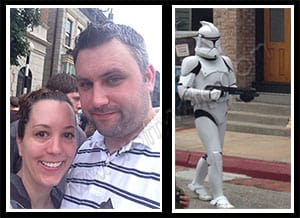 Unfortunately, I don’t have any good pictures of the show.  My iPhone isn’t the best at taking pictures of people on a stage (something to do with the lighting) and as of now, I don’t have a better camera to use for those sorts of things (I’m working on fixing that though!).  We did capture a video of the entire show, but it’s on Chris’ phone and he isn’t home so I found this one on youtube that you could watch instead!  (yes, I know it’s long…but it’s hilarious and you won’t be sorry if you watch it!)

We also saw the show Stars of the Saga with Tim Rose and Warwick Davis.  There were Storm Troopers there who kept us entertained until the show started and I was able to catch the best video (probably my favorite from the whole trip) to share with you all!

We had such a great time and were really sad to come home.  It was a short trip, but still fun and relaxing.  And now that we’re home, I get to have fun and craft to put all the stuff we bought into Chris’ “nerdy” (I say that lovingly) office.  I can’t wait for that blog post!

For now, I’ll leave you with this last video.

I create easy-to-follow craft tutorials to help you build confidence with your Silhouette Cameo and make projects that bring you joy. END_OF_DOCUMENT_TOKEN_TO_BE_REPLACED