Two weeks ago, Chris guest posted on the blog and wrote what he was looking forward to the launch of Disney Infinity 2.0.  We’ve had the game for a little over a week now and I think it is safe to say that our expectations for the new game have been met, and it is much better than we thought it was going to be.

We bought the Premium Value Pack from Amazon (affiliate link

) which included the Avengers and Spiderman playsets, characters (including Iron Man, Thor, Venom, and more), two power discs, and the toy box games: Assault on Asguard and Escape From the Kylm.  There was a lot to explore and Chris, being the gamer that he is, was more than happy to jump in and start exploring so that we could give you the best Disney Infinity 2.0 review! 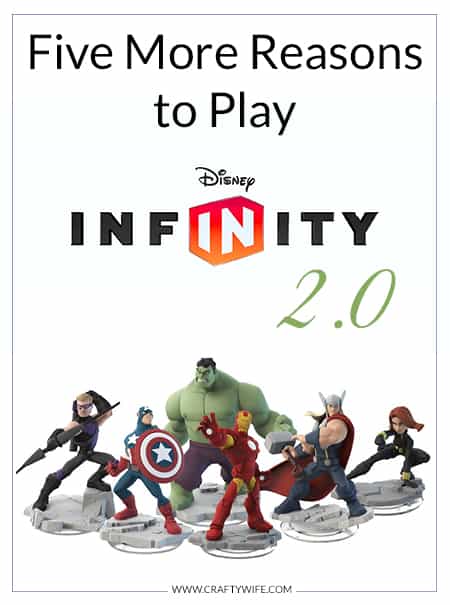 If you are new to Disney Infinity, we highly suggest starting out with the Spiderman playset.  After the playset introduction, you are given a challenge where it teaches you how to use the controller to play the game.  The graphics are really great in this part of the game and even though Chris and I already knew how to play, we had a lot of fun “re-learning”.

As of right now, not all of the characters for the Marvel playsets have been released.  Chris and I have slowly been buying them as we find great deals at Toys R Us, Target, and Wal Mart but still have a few more to get.

As you level each character, their special powers get more and more powerful.  Nova is one of the top rated characters to play because his super power (when fully charged) is the best, and when fully leveled he can defeat most characters with one shot!  Iron Man is also a good one as well as Thor.  We love that they can fly and that they have snarky comebacks and super cool super powers.  Here are our favorites so far, ranked against others in their playsets…

Guardians of the Galaxy:

We currently own Groot, Drax and Rocket Raccoon, but have not been able to play them in the Guardians playset because we do not have the software for that particular game.  We will come back and update this once we’ve bought and played all the characters.

Escape from the Kyln – This game takes you through missions with a sidekick who helps you destroy enemies.  You collect gear throughout the game that will give your sidekick more power which enables him to help you kill stronger enemies.

Chris loves this game because it plays a lot like the Lego games (Lego Harry Potter, anyone?) and you gain a ton of experience while going through the levels.

Assault on Asguard – Use money to build towers to help you defend an object from enemies. When those enemies die they drop coins that allow you to buy more towers to defend against stronger enemies as you continue in the game.

This is my favorite game because of how strategic it is!  It’s hard to play with just one person, so if you have someone else that wants to play with you you’ll have a much easier time defeating the enemies.

My INterior – A home base for your characters where you can design your own “home” with decorations from your favorite Disney movies.  You can use any character (old 1.0 or new 2.0) to build your INterior!

What about the 1.0 Characters?

There has been a lot of talk on whether it is worth it to keep your 1.0 characters from the original game.  There is plenty for them to do in this new game, and it’s fun to do new challenges and missions with your favorite old characters.

Here are just a few things you can do with your 1.0 characters in Disney Infinity 2.0:

What about the girls?

One big concern among Disney Infinity fans was that Disney had decided to delay the release of the classic Disney characters (or Disney Originals as they are so fondly called) until November of this year.  Many parents were concerned that their daughters would not want to play Marvel characters as much as their sons, and that they’d be upset because there would be no “girl” characters for them to play (I’m putting the word girl in quotation marks because Black Widow and Gamora are both currently available, even though they are Marvel characters).  While there aren’t a lot of new characters for young girls to play in the Marvel playsets, they are able to play their 1.0 characters in other areas (see above).  And who knows, they may really enjoy flying in the air with Thor or Iron Man!  You never know.

What do you think?  Are you a fan of video games?

I create easy-to-follow craft tutorials to help you build confidence with your Silhouette Cameo and make projects that bring you joy. END_OF_DOCUMENT_TOKEN_TO_BE_REPLACED