One of my favorite decor items we made for the shower were tulle balls.  The great thing about this decoration was that we could make them in any size and color.  It took some trial and error to get them right and a few of us got a little frustrated when the tulle balls weren’t coming out like we planned.  I also found out that there aren’t a lot of tutorials on Pinterest that could tell us how to make them.

I did find one tutorial (which I cannot locate at the moment) that helped me get started.  The supplies I used were:

The first thing I did was cut the animal print fabric into one inch strips.

I traced circles on the cardboard and cut them out.  I also cut out a smaller circle in the middle of the bigger one. 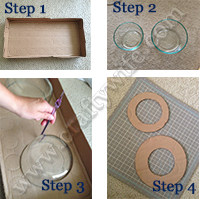 I wrapped ribbon around the outside of the large circle and tied it in a knot.  Once I started wrapping the tulle (loosely) around the circle I made sure to move the ribbon towards the middle (smaller circle).  This is also when I added the animal print fabric into the mix.  I tied as many as six pieces that were evenly placed around the circle (unfortunately I do not have a picture of this step).

Place your scissors underneath the tulle and begin to cut.  Cut along the outer circle, taking care to not cut the ribbon.  Untie the first knot you made before you started wrapping the tulle.  Then tie an extremely tight knot around the middle of the tulle.  Pull the tulle through the smaller circle.  Then pull the tulle apart to get a fuller ball.

You may have to cut parts of the tulle to even out the balls, but don’t cut too much or you won’t have any tulle to work with!

There were a few things I learned while making these:

We had a lot of fun making these for the shower and (as far as we know) everyone loved them!  There was also a suggestion that after the shower my sister could use the tulle balls and turn them into a mobile for the nursery.

So what do you guys think?  Are you a fan of the tulle balls or do you have a cheaper/more cost-effective version that’s more your style?

I create easy-to-follow craft tutorials to help you build confidence with your Silhouette Cameo and make projects that bring you joy. END_OF_DOCUMENT_TOKEN_TO_BE_REPLACED