Last week Chris and I drove the 13 and a half hours to Disney so we could attend the Food and Wine Festival at Epcot.  It’s one event we’ve never been to and I had talked about going for a really long time.  Last year we missed it by arriving one week to early and this year I wasn’t taking any chances.

We got there the second day it was open (on a Saturday) and it was ridiculously crowded. One thing we hadn’t counted on were the number of locals who were there to do the same thing we were, eat and drink some yummy and delicious things.  We weren’t able to hit every stand in one day, but we did go again during the week and didn’t have to wait in super long lines.

There was one part of the Wine and Food Festival that was a bit disappointing for me. Since I have a severe peanut and tree nut allergy, I couldn’t eat some food from a few stands.  I was really looking forward to trying the Greek cuisine, but I just couldn’t risk it. Food allergies can be a total bummer, but it really is better being safe than sorry!

Chris and I had a blast at the Festival!  We’re already talking about going back next year and (hopefully) staying a bit longer.  That way we can eat our favorites more than once! 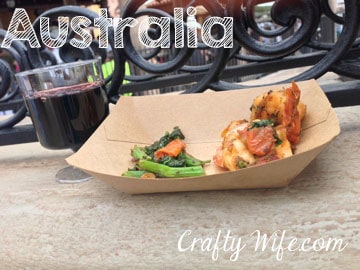 I love shrimp, so I was really excited to try Australia’s Garlic Shrimp.  We paired it with a Cabernet Shiraz and went to town.  I thought it was delicious but Chris isn’t a huge shrimp fan so it wasn’t his favorite! 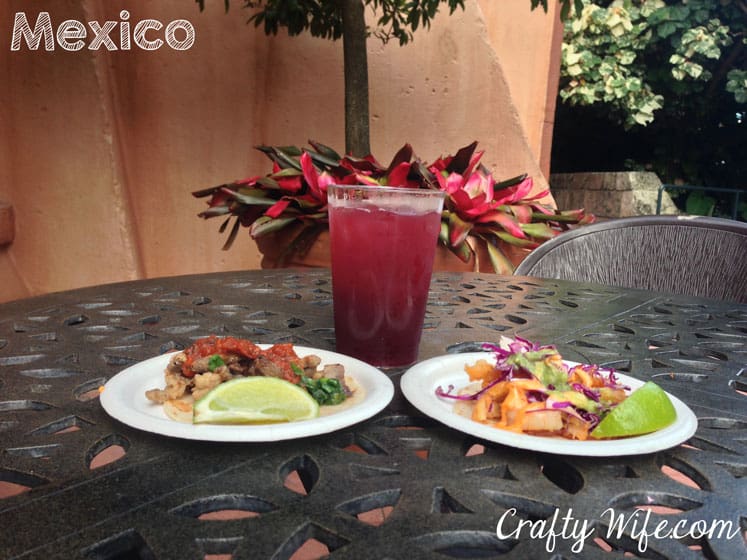 Mexico was by far my favorite!  Chris had the Taco de Rib-Eye with Salsa de Chipotle and I had the Shrimp Taco with Purple Cabbage.  We also bought the Sangria to go with our meals.  It was all delicious!  Chris’ was a little too spicy for me, but it was still really really good.  I bought the Food and Wine cookbook just for the shrimp taco recipe.  I can’t wait to make it at home! 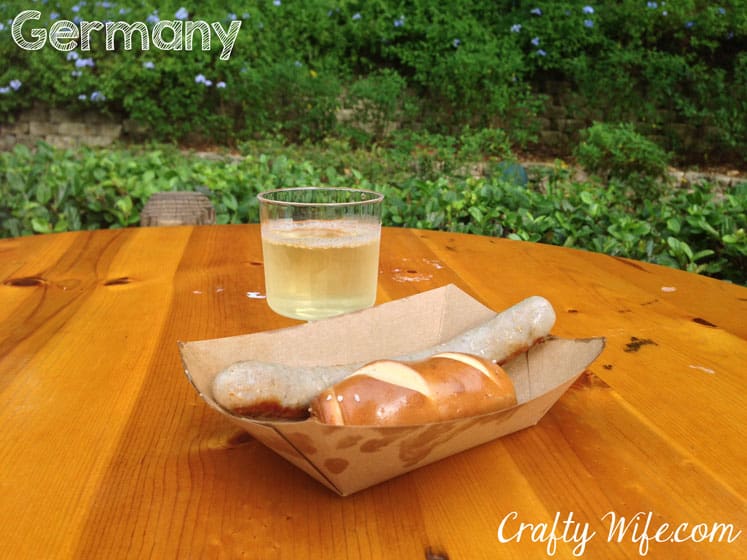 Chris loves anything German (since that’s where his family is from) and couldn’t wait to try the Roasted Bratwurst in a Pretzel Roll.  We paired it with the Selbach-Oster Mosel Riesling Spatlese.  He really loved this meal, but it wasn’t my favorite. 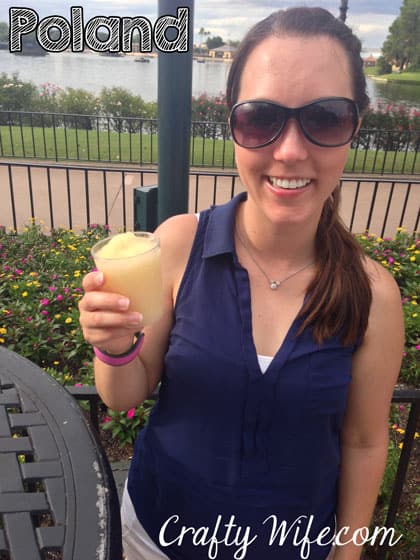 Since my family is part Polish, we had to go see what they were offering at their stand! We weren’t really interested in the food (too many mushrooms for our taste), but the Frozen Szarlotka (Apple Pie) sounded delicious!  It looked just like applesauce and tasted delicious!  This recipe is also in our cookbook and we’ve already made it a few times at home. 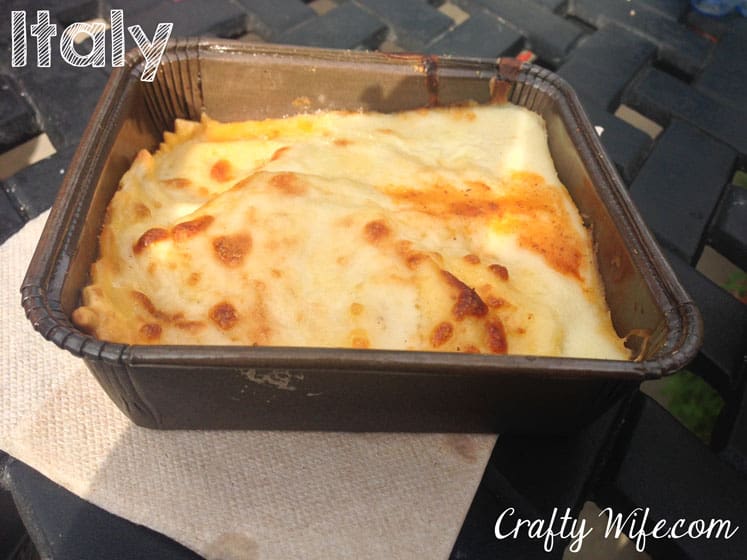 I had a really great picture of this with the ball in the background, but some guy wanted to share our table and ruined the picture.  Anyway!  We had heard really great things about the Ravioli de Formaggio all’Emiliana and decided we wanted to try it.  Trust me, we were not disappointed.  It was delicious!  The Ravioli was so creamy and delicious.  I think this one is also in my cookbook, so I’ll be making it for us to eat at home sometime soon. 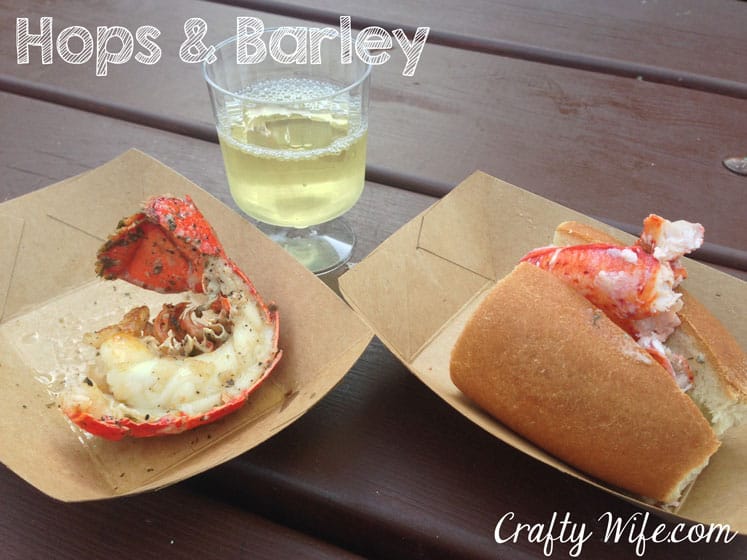 You learn something new about your spouse every day, especially when you’re at Disney. At least, that’s what Chris and I have found to be true!  I had no idea he liked Lobster and was surprised when he wanted to try the Grilled Lobster Tail in America.  His was delicious, nice and warm, and the garlic herb button on top couldn’t have been better.  My Lobster Roll was okay, but I definitely preferred Chris’ dish more.  We paired our meals with the La Crema Sonoma Coast Chardonnay. 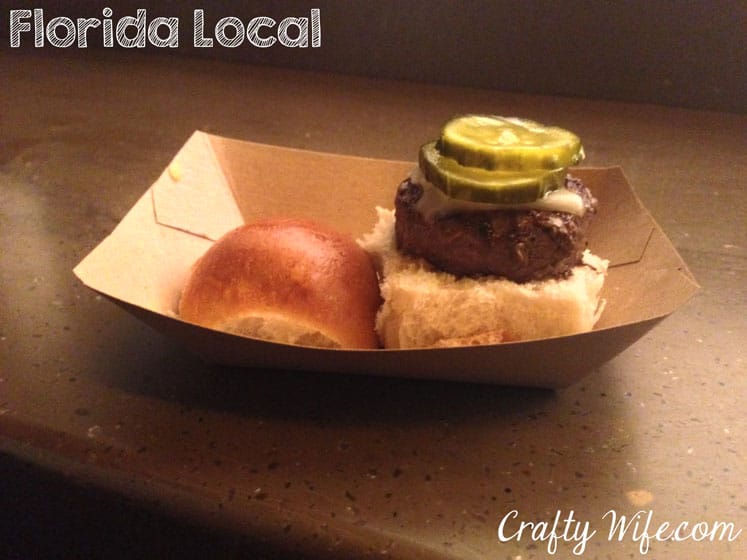 This was another one that Chris couldn’t wait to try.  The Florida Grass Fed Beef Slider was actually really delicious, and the Key Lime Wine (not pictured) was awesome!  The drink had just the right amount of sweet and sour and we were both trying everything we could to make sure we had the last drop. 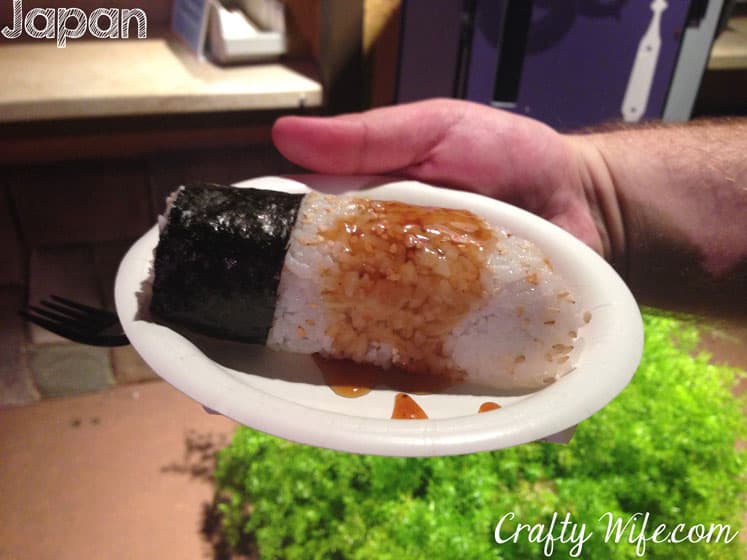 I wasn’t in the mood to try this Teriyaki Chicken Hand Roll, but Chris loves Teriyaki and couldn’t turn it down.  This was the first dish we had that Chris really didn’t like.  They wrap the chicken in seaweed and Chris said the flavor (to him) just wasn’t that appealing. He was pretty disappointed. 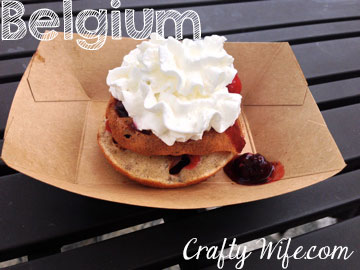 Another dish everyone was talking about were the waffles.  We got the Belgian Waffle with Driscoll’s Berry Compote & Whipped Cream and couldn’t get enough of it.  It was pretty rich, but the flavors were awesome and we definitely weren’t disappointed. 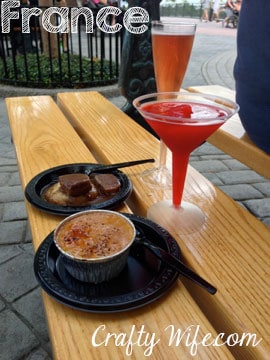 I have nothing bad to say about any of these dishes or drinks.  Let me start off by saying, the Boeuf Bourguignon (braised short ribs) was amazing!  Chris almost forgot to let me have a bite because he was so busy enjoying and eating the dish!  However, I almost ate all of the Creme Brulee au Chocolat au Lait (chocolate milk creme brulee!) so I can’t really blame him for getting wrapped up in the beef.  The dessert was fantastic.  So good in fact, that I went back later for seconds, and it was gone in under a minute (no, I did not share the second time around).  The drinks were also really good.  Chris had the Sparkling Pomegranate Kir and I had the Eiffel Sour Cosmo Slush.  We shared, and were happy with both. 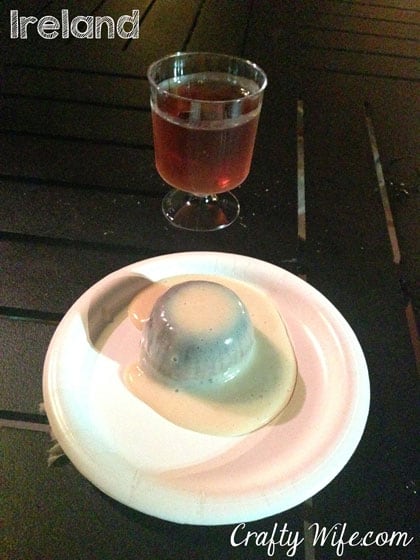 While I really loved the Creme Brulee from France, I have to say that this Warm Chocolate Pudding with Bailey’s Custard was my favorite dessert by far.  The chocolate was so rich, and the custard on top pulled everything together very nicely.  The Meade (Honey Wine) was also really really great, and made me feel like I was in a Harry Potter movie.  haha! 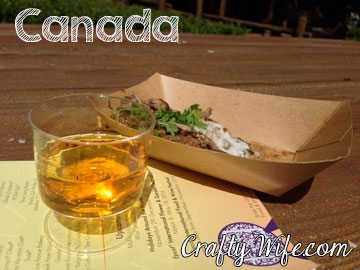 The “Le Cellier” Wild Mushroom Beef Filet Mignon was, by far, Chris’ favorite meat dish of the Festival.  It could’ve used a little more salt, but it was honestly so delicious.  We paired it with Apple Ice Wine, and loved that too.  In fact, I think that was our favorite drink (besides the Apple Pie from Poland). 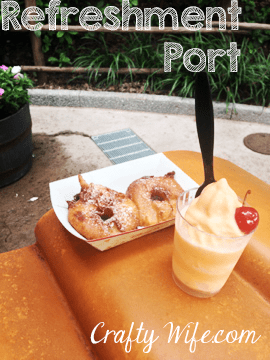 When we went to the Flower and Garden Festival in May, Epcot had a really great rum and dole whip drink.  We knew they were going to have another dole whip concoction at this Festival, and really wanted to try it.  We had Dole Pineapple Fritters and Orange Dole Whip with Creme de Cacao White.  We loved the fritters, even though they were kind of hard to break apart.  The drink was good, but there was a lot of alcohol in it and it was kind of hard to finish.  I was hoping it would taste like a creamsicle, but the alcohol overpowered everything. 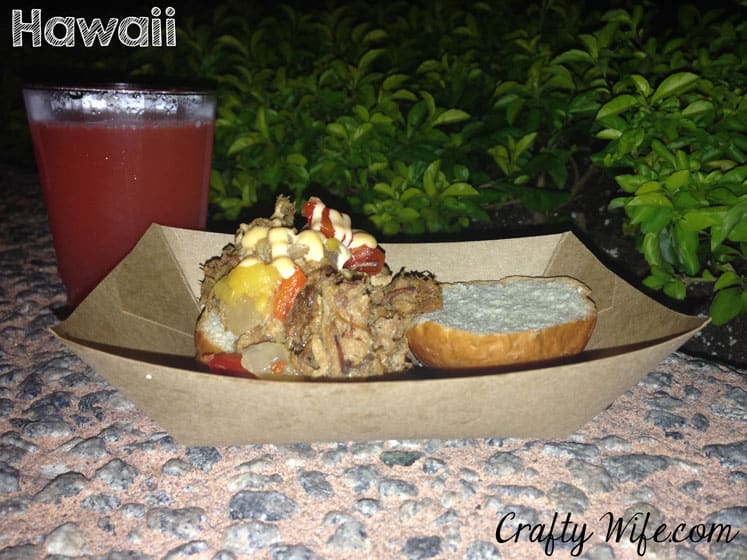 The Kalua Pork Slider with Sweet and Sour Dole Pineapple was not at all what we were expecting.  I liked it, sans a few odd spices, but Chris did not.  The spices overwhelmed his taste buds and he just wasn’t a fan.  However, we loved the Aulani Sunrise!  That drink was amazing and you couldn’t taste the alcohol at all.  That recipe is also in my cookbook and I’m sure we’ll be making that to drink sometime soon too.

Looking at all the pictures of the different foods we tried makes me wish we could go back there and eat our way around the world again.  I can’t wait to try a few of the recipes in my cookbook and drink a few of the drinks again!

I create easy-to-follow craft tutorials to help you build confidence with your Silhouette Cameo and make projects that bring you joy. END_OF_DOCUMENT_TOKEN_TO_BE_REPLACED