On our recent trip to Disney I had the opportunity to practice taking fireworks pictures.  It’s something I’ve attempted and failed at more times than I can count.  I always left a show frustrated and put out because every attempt I made at capturing a shot turned out horribly wrong.  But before we left for our trip I tried to do a lot of research about how to take better pictures, and the information was so helpful that it resulted in pictures like this. 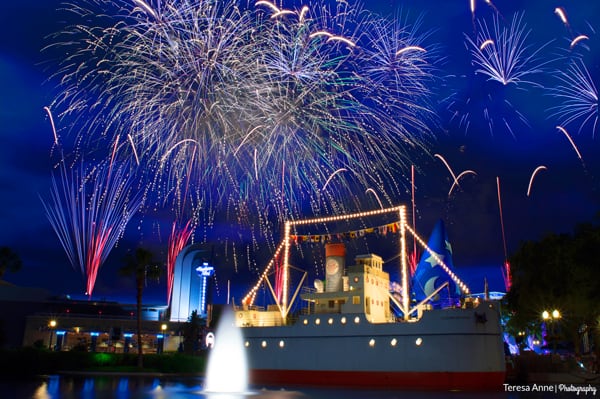 With all the failures I’ve had in fireworks photos, I was absolutely thrilled to get a shot like this!  It is definitely not perfect, but I’m happy with my first attempt.

Today I’m sharing some tried and true tips on fireworks photos, and I will hopefully inspire all of you to pull out your cameras for the upcoming 4th of July shows I’m sure y’all are going to! 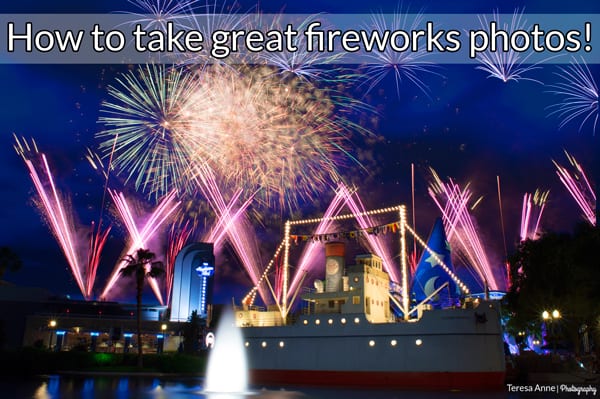 Here is what you’ll need to take great shots:

I like to get to my spot about an hour early and set up my camera.  I take a few shots in Aperture Priority Mode to make sure that I like the set-up and also so that I can overlay them in Photoshop later to get more vibrant colors out of the sky and the bottom of my photograph.  It’s only really important to take multiple photographs if I know I won’t be able to get the entire scene in the shot once the fireworks start going off.

Here is an example of what a fireworks shot looks like with absolutely no Photoshop edits.

Not only is the boat and water fountain cut off at the bottom, but the scene is also incredibly dark which really isn’t that pleasing to look at.  So, that is why I take a few photos before the fireworks start!  That way I can get a more pleasing picture once I edit everything in Photoshop.

Now before you start wondering how I get so many fireworks in one picture without everything becoming whitewashed, let me explain.  I used to think that I could just hold down the shutter release for 10+ seconds and the shots would come out great.  Nope. When I did that this is the kind of picture I ended up with.

It’s not terrible, but it isn’t a great photograph either!  Only hold your shutter release down for 3-6 seconds.  You won’t capture a ton of bursts in one shot, but you can always fix that later with photo editing software.

Like everything else, fireworks photography comes with a learning curve.  It may take a few tries to get a good shot but it will happen!  Just be patient and have fun with it! 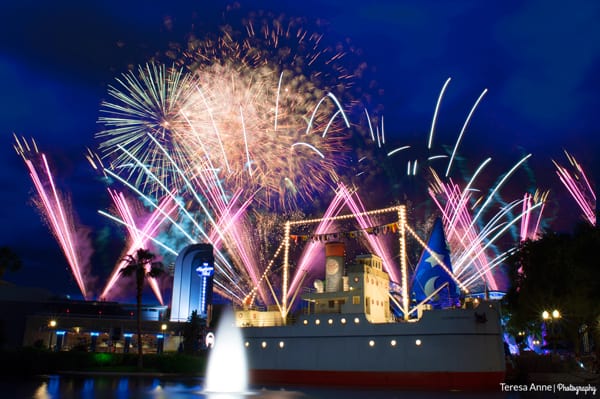 Here are a few more tips and tricks:

And just in case you don’t want to write everything in your phone, I’ve put together a cheat sheet just for you!

Do you have any tips for taking fireworks photography?

I create easy-to-follow craft tutorials to help you build confidence with your Silhouette Cameo and make projects that bring you joy. END_OF_DOCUMENT_TOKEN_TO_BE_REPLACED