Last week when Chris and I were at Disney we took the opportunity to go to Mickey’s Very Merry Christmas Party.  We had gone to the party last year but didn’t really know what to expect so we spent a lot of time wandering around aimlessly trying to figure out what we wanted to do and see.  This year though, we went in with a plan.

I really wanted to take the time to see the 8:15pm and 10:30pm parade shows, that way I could enjoy one and try to get pictures of the second one.  The Frozen show at the Castle was also a must-do, and I was determined to get a good spot for the fireworks as well. Luckily we were able to do it all and more, which was amazing and such a blast. 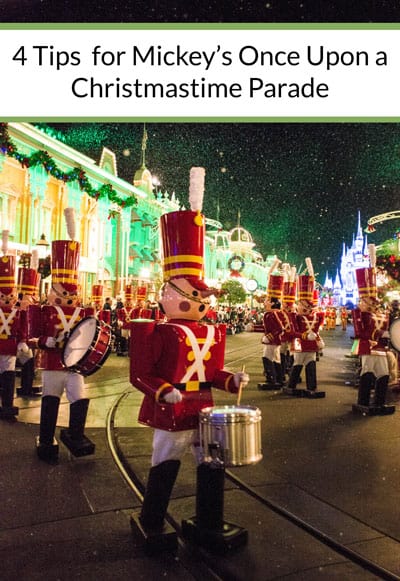 Deciding which parade to see

Mickey’s Once Upon a Christmastime Parade has two showings: 8:15pm and 10:30pm.  I highly suggest going to see the second one, because the first show is ridiculously crowded. As soon as the park closes to the general public (at 7:00pm), people start lining up on the streets to get a good spot for the first parade show and the fireworks.  If you’re not a fan of dealing with large crowds, the second showing is definitely the way to go. 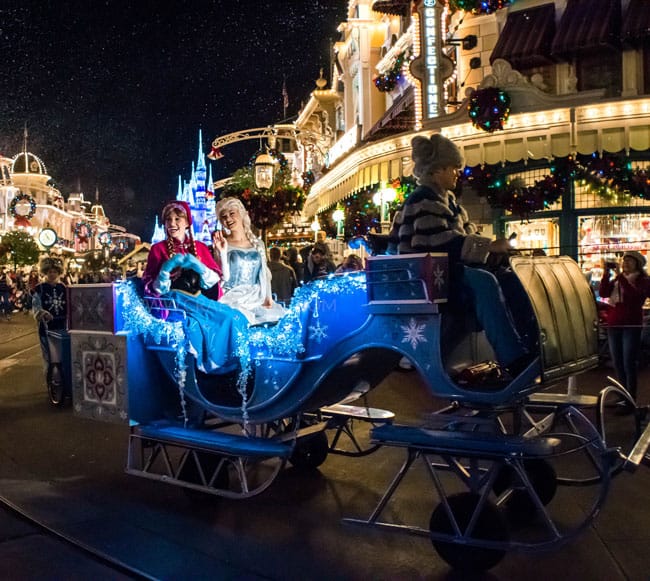 Planning ahead for seats

Depending on when you go to the parks, these events can be either moderately crowded to a nightmare.  The closer to Christmas you go the more crowded the party tends to be, so if you’re not a fan of crowds you should try to go early in November or before the first weekend of December.

If you decide to do the latter, plan to grab seats an hour and a half to two hours before the show starts.  Bring something for your kids to do so they don’t get bored and send someone in your party to grab the complimentary cookies and hot chocolate (or juice) that Disney gives out in areas throughout the park during the party.  You’ll be there a while, but it’ll all be worth it when you see Mickey and Minnie making their way down Main Street!

Where to view the parade

There are two places you can view the parade from: Main Street USA or Frontierland.  I highly recommend Main Street USA if you want to get pictures, because the streets are lit up and your ISO doesn’t have to be crazy high to be able to capture great photos.  If you’re not worried about pictures and just want to enjoy the parade, Frontierland is a great option because it’s not as crowded! 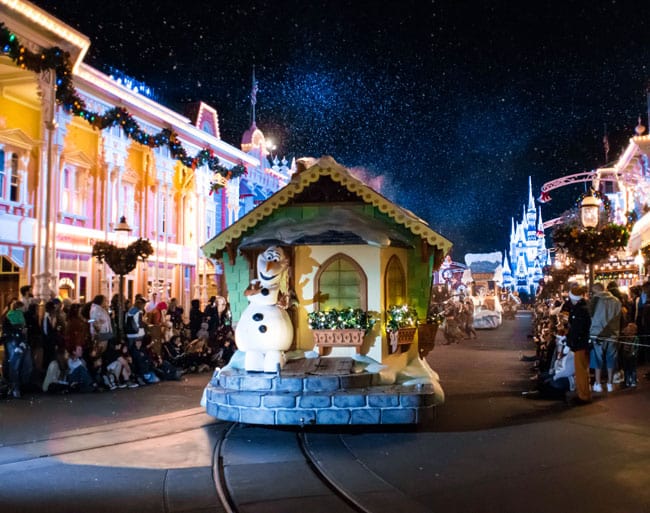 I honestly believe that if you are just watching the parade solely for entertainment purposes and don’t care about pictures, anywhere you sit is going to be fine as long as you are in the front.  But if you’re trying to take good pictures then there are definitely spots that are better than others.

This trip, Chris and I sat right in front of the big Christmas tree so that we could look right down at the castle as we watched the floats go by.  It was a great spot for pictures because I was still able to get the castle in the background (which is what I really wanted).  Other spots that are great are right at the corner of the hub and where the reserved Fastpass+ seating is. Sitting on top of the train station is another great area because you are able to get an ariel view of the floats and characters too!

No matter what you decide to do, definitely make sure to stop and see this parade.  It’s a fun one to see and it’s great because all the characters are dressed up in their Christmas best. ButIf you can’t make it to a MVMCP event, don’t worry!  Disney ends up replacing the daytime parade with Mickey’s Once Upon a Christmastime Parade after December 19th so that all guests can experience it.  It is worth noting that there is a huge tradeoff though, because crowds after December 19th are absolutely crazy until the New Year.

No matter what you decide to do, this parade truly is a lot of fun to watch!

Have you ever gone to the Christmas party at Disney and experience the parade?  What did you think of it?

I create easy-to-follow craft tutorials to help you build confidence with your Silhouette Cameo and make projects that bring you joy. END_OF_DOCUMENT_TOKEN_TO_BE_REPLACED