We all go to Disney for the experience, the characters, and the rides, but have you ever gone just for the entertainment?  The fireworks, the nighttime shows, the parades and the live action shows that Disney offers?  For us, these 10 entertainment options are some of the best that Disney has to offer, and are must-sees anytime we travel to Disney. 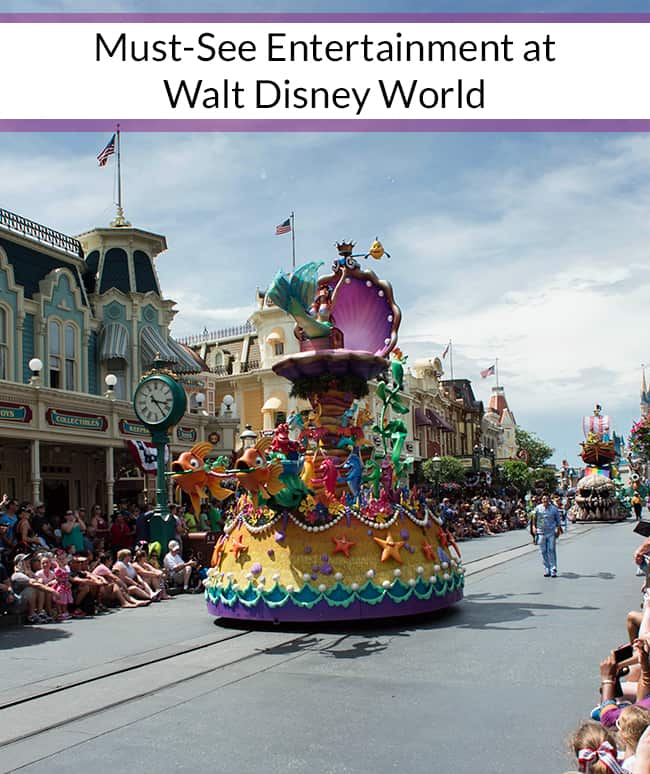 Fantasmic! is one of my favorite shows at Disney World!  It combines pyrotechnics, laser lights, and a water show that will immerse you into Mickey’s imagination and take you through some of the best Disney classics.  You’ll also get to see a few of our favorite love to hate villains as they try to steal the show from Mickey Mouse.  This show is a great way to end the day, and your little ones will love being able to see all the characters in one place.

Chris and I usually don’t watch this parade (even though I always want to) because we find that it’s a great time to get in line for rides with minimal wait times.  However, I have always loved this parade for its music and all the characters you get to see.  All of the floats and the characters outfits are lit up too which makes it fun for the kids!

This is by far my favorite parade at Disney World.  It’s relatively new and we’ve only seen it once, but once was enough for me.  I fell in love.  The music for this parade is spectacular and the costumes are colorful and gorgeous.  And there is even a fire-breathing dragon!  Even Chris agreed that he was happy we stopped to watch it (and he is not a big parade lover).  If there is one show you shouldn’t miss while at Disney World, it’s this one.

Festival of the Lion King

The Festival of the Lion King just opened up in its new location inside Animal Kingdom, and it was still incredibly busy when we went to go watch it.  You may want to grab Fastpasses for this one if you’re thinking about doing it.  There is lots of singing, dancing, and acrobatics and audience participation.  It’s a fun show and also a really great way to get out of the heat and sit in an air-conditioned room a little while!

Voyage of the Little Mermaid

This is by far my favorite show at Hollywood Studios.  You’ll see all of your favorite characters from The Little Mermaid and listen to your favorite songs all in a short 17 minute show.  There is no flash photography allowed because the theater is dark and it could blind the performers, so please be considerate to those around you while in the theater!  My favorite part of the show is Ursula, because she is one of my favorite villains and her interactions with Ariel are the best!

Chris and I haven’t done the musical on the past few visits, but it is definitely one of our favorites!  We love the songs they wrote for the show and the costumes are just fantastic.  We always walk out singing a few of our favorite songs, and they stay in your head long after you get back home.

Beauty and the Beast – Live on Stage

As a kid, this was by far my favorite show in all of Disney World.  As I’ve gotten older a bit of the magic has worn off, but I still love going just to listen to my favorite songs.  The musical numbers are so much fun and I absolutely love the Be Our Guest number!  Anytime Gaston is on the stage is an absolute riot (they always pick a great guy to play him) and it’s always fun to see him interact with the other performers.

This is a 10 minute show right before the fireworks, and it’s a great way to pass the time while waiting!  Images are projected onto Cinderella’s Castle creating some fun and interesting effects.  You’ll see Mickey, some classic Disney movies and even some of the newer ones like Wreck it Ralph and Frozen all projected onto the castle to music.  It’s definitely a fun show to watch!

I guess it’s no secret that I love anything at the Magic Kingdom, and this is why.  There is nothing more magical than Cinderella’s Castle to me, so anytime there is a parade or fireworks show (or anything else for that matter) I am right there soaking in all the fun.  This is why Wishes will always be my favorite fireworks show.  I love watching the colors light up the castle, Tinkerbell take flight, and listening to the music all while the bursts go off above me.  It’s truly magical and a great way to end the night.

So, what do you think?

Did I miss any of your favorite entertainment must-sees at Disney?

I create easy-to-follow craft tutorials to help you build confidence with your Silhouette Cameo and make projects that bring you joy. END_OF_DOCUMENT_TOKEN_TO_BE_REPLACED