Eight years ago yesterday my dad passed away.  It was very sudden, and as far as we know the only issue he had was a gallbladder that needed to come out (which was scheduled to happen).  However, in the early afternoon of September 29th he passed away in our backyard, home alone while doing yard work.  It was honestly the worst day of my life, and one I have fought long and hard to move past because it is just too sad to think about on a daily basis.

Yesterday I spent a lot of time reflecting on that day and the aftermath.  At the time the grief was overwhelming, my world was shattered and it would never be what it once was.  I grieved for the loss of my life before my dad passed and I grieved for the future that he would not be in.  I spent months crying myself to sleep, waking up in a fog, jolting awake from a dream that was so real that I would convince myself he was alive until the feelings of despair came crashing down again when I realized it wasn’t true.  I made poor decisions, ones I know my dad would have been so disappointed by.  I had mood swings that went from pure denial to crazy angry bitter girl in two seconds flat.  I was lost.  So lost that it took me two years to find my way back.  Two years before I began to heal and deal with what happened. 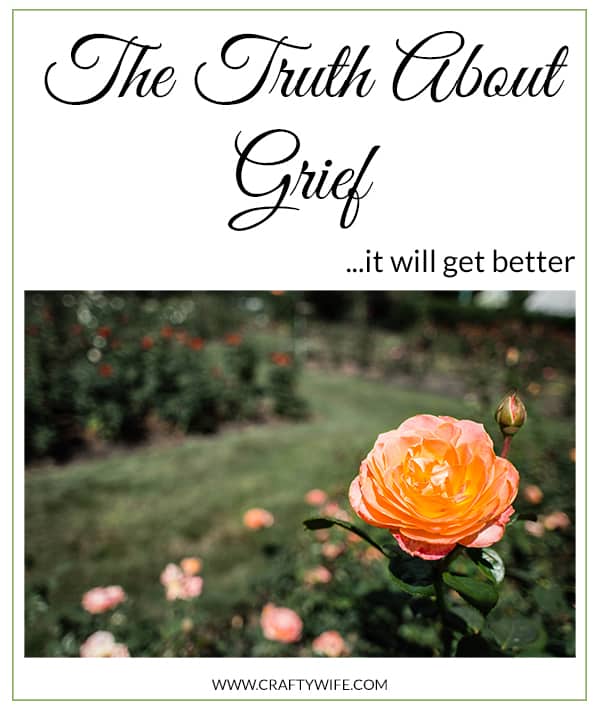 It has been six years since I began to heal, and I still feel like I am nowhere close to being okay.  I still have hard days.  I still cry.  And I still miss him like crazy.  Grief is like an unwelcomed friend, it sneaks up on you at the most inopportune times.  I am still learning how to navigate my new normal (albeit, I’m doing better than I was eight years ago) and I’m still dealing with feelings of loss, regret, and anger on a somewhat regular basis.

But, there are a few things I’ve learned the past few years that I want to pass on in hopes that it will help someone.  Because I’ve been there.  And I know that it can seem like you are all alone and that things will never get better for you.  But…

It really does get better

If you are smack dab in the middle of losing a loved one, I know that the words “it will get better” are probably making you roll your eyes.  You’re probably even thinking of a snarky comeback to throw at me just for saying those words.  I get it.  I hated it when people told me that after my dad passed.  It feels like it’ll never get better and that you’ll be sad forever.  But you won’t.  Grief is a funny thing.  It gives you tunnel vision, and you can’t really see too far ahead of where you are.  You will though.  You’ll slowly find your new normal and try to pick up the pieces.  It may take a while but it will happen.

You are not alone

Grief can make you feel like no one else will ever be able to understand what you’re going through.  That is not true!  Lean on friends and family during this hard time.  You are not alone.  People want to help, they want to be there for you.  Let them.  It will help heal you in ways you would never dream.

I thought it was so unfair how all of my friends went back to their normal lives after my dad died.   How could they think everything was normal when it so clearly wasn’t?  When a tragedy happens, people who are not directly involved tend to go back to their version of normal very quickly.  It’s because they aren’t living with the aftermath like you are.  It is nothing personal, and it does not mean that they do not care.  It may be frustrating at times and overwhelming because you just want to talk to someone who truly understands what you are going though.  But don’t be angry because your friends are going out to a movie on Friday night when all you want to do is stay at home.

Yes, life goes on and things will get better for you.  One day you’ll realize that it’s been a week since you’ve had a good cry or that you haven’t thought about your loved one in a few days.  I felt a lot of guilt when I “forgot” to think about Dad at first.  That went away after time too.  As time passes, you’ll begin to realize that it’s not so hard to get back into a normal routine again.  But that does not mean that you won’t still grieve the loss of your loved one.  It doesn’t mean that a busload of feelings won’t hit you out of the blue.  And it doesn’t mean that you won’t need anymore “dark” days where all you want to do is lay in bed with the covers pulled over your head.  It just means that it won’t happen as often.

Just remember that grieving is normal.  Things may seem bad at first but time will help with that.  I don’t believe that time will ever fully heal the wounds, but it does help.

What are your thoughts on grief?  Do you have any suggestions to help those in the early stages of it?

I create easy-to-follow craft tutorials to help you build confidence with your Silhouette Cameo and make projects that bring you joy. END_OF_DOCUMENT_TOKEN_TO_BE_REPLACED